KONDA conducted its first election surveys for the 1987 General Elections. The last of the six surveys we conducted in july-November, prior to the elections held on November 29, 1987, predicted that a three-party parliament would be formed with 44.6 percent of the vote of ANAP, 18 percent of the SHP and 12.4 percent of the DYP, and that the DSP would remain below the threshold. Anap won 36.3 percent of the vote, shp 24.8 percent and DYP 19.1 percent.

We did a series of researches for Milliyet newspaper before the popular vote on constitutional amendments on September 25, 1988, on whether local elections should be held a year early. The latest research, published on September 24th, found that if 2.5 per cent undecideds were disbanded, the Yes would be 34.97 per cent and the Nos would be 65.03 per cent. As a result of the popular vote, Yes came out 35 percent and No 65 percent, and Milliyet announced this result with the title "Full hit from Milliyet".

In our research in the three major cities for the March 26, 1989 Local Elections, we predicted that SHP would win the mayoral elections.

In our research ahead of the General Elections held on October 20, 1991, we predicted that the DYP would take power from ANAP, but we could not foresee that ANAP would be the second party, not the SHP, due to the difference in the vote. The october 15-17 survey showed the DYP would get 27.4 percent of the vote, ANAP 22.1 percent and shp 24.8 percent, but the election resulted in the DYP getting 27 percent, ANAP 24 percent and SHP 20.75 percent.

Prior to the March 27, 1994 Local Elections, the main competition for the Mayor of Istanbul Metropolitan Municipality was between İlhan Cutter of ANAP and Zulfü Livaneli of SHP. Konda's survey for Kanal D, published in Milliyet on March 26th, predicted 24.9 percent for ANAP, 24.7 percent for SHP and 23.1 percent for RP, but the headline of the story was "Prosperity may emerge from this table". In the local elections, the Welfare Party won 25.19 percent of the vote in Istanbul and Recep Tayyip Erdogan became mayor.

The poll we announced ahead of the 1999 General Elections was a news story about the rise of the MHP and the chp's fall under the threshold. Those who didn't like such a possibility did not find this finding credible. After all, it's not like The DSP received 22.2 percent of the vote, the MHP 18 percent, the FP 15.4 percent and the ANAP percent 13.2 percent, and the DSP/MHP/ANAP coalition was formed.

Tarhan Erdem conducted 4 surveys starting 2 months before the November 3rd elections. In these investigations, it was seen that the current ruling coalition parties remained under the dam, the Ak Party would be in power, and outside the CHP, Cem Uzan's Young Party would only cross the threshold. The 2002 election resulted in a picture that excluded coalition parties from parliament, as research shows. The decline of the Young Party, which fell from 15 percent to 9 percent in the latest survey, continued until the ballot box and it managed to win 7 percent of the vote.

"Who Are We?", which conducted face-to-face interviews with 48,000 people across Turkey and revealed important data on the ethnic/religious structure of the country and the Kurdish Question Social Structure Survey". The ethnic composition of Turkey had not been published since the 1965 census, and this survey, which put the Kurdish population in Turkey at 14 million people, was widely recognized. Who Are We? Social Structure Survey https://konda.com.tr/tr/rapor/biz-kimiz-toplumsal-yapi-arastirmasi/

Ahead of the July 22, 2007 General Parliamentary Elections, the poll predicted that the Ak Party would win 47.9 percent of the vote, and different columnists from the press criticized KONDA and Tarhan Erdem, who announced the possibility that the ruling party was receiving almost half the votes. Some members of the press claimed only that the poll could be wrong, while one group accused KONDA of influencing the electorate in favor of power and being hostile to the opposition. On July 22nd, the result of the ballot box (46.7 percent of the White Party) was almost identical to konda's poll result. The election results also reassed our prediction that the DYP would fall under the threshold.

The "Religion, Secularism and Turban in Everyday Life Survey", which is a follow-up to a survey we conducted in 2003 and published in September 2007, not only tracks the changes in the rate of those who cover in Turkey over the past five years, but also takes a snapshot of the public's religious worship habits and the place of religion in daily life. http://konda.com.tr/tr/rapor/gundelik-yasamda-din-laiklik-ve-turban-arastirmasi/

We conducted our first lifestyle survey in April 2008, titled "Who Are We? Lifestyles" in April 2008. We interviewed 6482 people face-to-face for the survey, whose model was based on people's perceptions, fears, expectations, political preferences, values, their demographic characteristics and environment, and their daily life habits. Among the lifestyle clusters that emerged from the research, the "Anxious Moderns" cluster became a frequently used term. Who Are We? Lifestyles Survey 2008 https://konda.com.tr/tr/rapor/biz-kimiz-hayat-tarzlari-arastirmasi-2008/

We did not succeed in our measurement of the local elections held on March 29, 2009.

In March, we conducted the first survey of the KONDA Barometer Political and Social Research series by interviewing 1826 people face-to-face in 26 provinces. In addition to measuring political preferences, voter behavior and reactions to current political events, we also measured our first Satisfaction Index and set our theme for the month as "The Effects of the Economic Crisis" in order to understand the effects of the 2009 economic crisis on society. http://konda.com.tr/tr/rapor/ekonomik-krizin-etkileri-arastirmasi/ 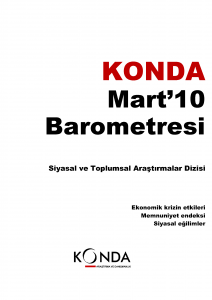 The measurement of the constitutional amendment to the popular vote was carried out four months before 9/12 in monthly KONDA Barometer research. KONDA announced the results of its research for the first time with a statement on its website, not directly from a media outlet. A week before the popular vote, the 56.8 Yes / 43.2 No ratio in our research was "held" with a deviation of just 1 percent with a ratio of 57.9 Yes / 42.1 No as a result of the vote.

In July 2010, we organized the "Who are we? The Kurdish Issue" research was published by İletişim Publications under the title "Perception and Expectations on the Kurdish Issue". http://konda.com.tr/tr/rapor/kurt-meselesinde-algi-ve-beklentiler/ 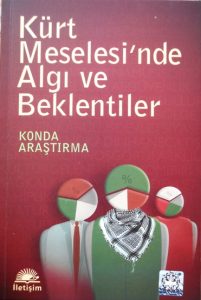 on June 6-7, 2013, 4411 people were interviewed in Taksim Gezi Park to conduct the "Gezi Park Survey: Who are there, why are they there and what do they want?" http://konda.com.tr/tr/rapor/gezi-parki-arastirmasi-kimler-neden-oradalar-ve-ne-istiyorlar/

KONDA changed its title to KONDA Research and Consultancy Inc.

With our research in November 2013, we interviewed 100,000 people within the scope of Barometer Political and Social Research series. We reached these 100,000 people with 37 studies representing voters over the age of 18 in Turkey with the same sample quality.

We have started to include an Agenda Barometer section in our KONDA Barometer reports. In these sections, we conduct a comprehensive media survey and compile and summarize it with KONDA's impartiality. With the Agenda Agenda, which we include as part of the Agenda Barometer, we chronologically classify important events in Turkey and the world . http://konda.com.tr/tr/gundem-barometresi/2017/

The results of our survey for the 10 August 2014 Presidential Elections on 2-3 August predicted that Recep Tayyip Erdogan would win 57 percent of the vote, Ekmeleddin Ihsanoglu 34 percent and Selahattin Demirtas 9 percent. In the election, Erdogan was elected President with 52 percent of the vote.

In February 2015, "Who Are We? We repeated the Lifestyles Survey and interviewed 5,783 people face-to-face in their homes.

We interviewed 1,875 people in 3 squares and published them as "Democracy Watch Research – Profile of The Squares" to understand the profile of those who went to the Democracy Vigils after the coup attempt on July 15, 2016 and why they were in the squares.

With our research in December 2016, we interviewed 200,000 people as part of the Barometer Political and Social Research series. We reached these 200,000 people with 71 studies representing voters over the age of 18 in Turkey with the same sample quality.

for the April 16, 2017 referendum on the constitutional amendments, the findings of the surveys we conducted on April 7-9, 2017 predicted a 51.5 percent Yes and 48.5 percent No vote. The referendum resulted in 51.2 percent Yes and 48.8 percent No, and the constitutional amendments were adopted.
https://beta.konda.com.tr/duyuru/1/halkoylamasina-dair-bilgi-notu

In April 2018, we conducted the 3rd Lifestyles Survey, interviewing 5793 people face-to-face in their households.

for the June 24, 2018 General Parliamentary and Presidential Elections, the findings of the survey we conducted on June 9-10, 2018 were that Recep Tayyip Erdoğan would receive 51.9 percent of the votes, Muharrem İnce 28 percent, Meral Akşener 10.2 percent and Demirtaş 9 percent. As a result of the election, Erdoğan received 52.59 percent of the votes, İnce 30.64 percent, Akşener 7.29 percent and Demirtaş 8.40 percent. Erdoğan was elected President.
https://beta.konda.com.tr/duyuru/17/kondanin-abonelerine-gonderdigi-bilgi-notu

In July 2019, we conducted the 100th Barometer survey. Until reaching the 100th issue, 67 different provinces were visited 2884 times, 10,617 surveyors worked in these projects and face-to-face interviews were conducted with a total of 272,559 people.

Due to the restrictions created by the Covid-19 pandemic, we turned to different research methods. After 4 months of trials and tests, we launched the KONDA Mediated Panel in December 2020.

since 2018, we have been sharing interactive content with the public as well as interactive data display modules exclusive to our subscribers. As of January 2021, we started to produce Barometer Interactive modules that will only be used by our subscribers. Our subscribers can analyze the data, which is the source of Barometer reports, using the variables they wish, by making inquiries in 11-year time depth.

In January 2022, with our 127th Barometer survey, we started the Barometer Webinar broadcast. In the webinar broadcasts, which can only be watched by our subscribers, Barometer data is presented with Bekir Ağırdır's analysis and comments.