The Note Sent to KONDA Subscribers

We hereby submit this declaration to the subscribers of the KONDA Barometer Political and Social Survey Series, which will also be published on our website www.konda.com.tr today on the basis of the authority and right granted to us by our subscribers pursuant to a special provision in the subscription agreement.

The survey which forms the basis of this declaration was conducted on June 9-10, 2018. It was considered that the weekend preceding the elections, being a religious holiday, would entail intense mobility thereby constituting an inappropriate atmosphere for conducting a survey suitable for the sampling. Thus, our findings reflect the tendencies and preferences pertaining to a period 14 days before the elections.

Within the scope of the survey, face-to-face interviews were conducted with 2721 interviewees in their homes in 153 neighborhoods and villages of 101 districts of 31 provinces, including the central districts. Age and gender quotas were applied in the 18 surveys conducted in each neighborhood.

The survey reflects the political tendencies of the subjects representing the adult population above the age of 18 in Turkey (domestic electorate) on the days when the field survey was held.

The sample was selected through the stratification of the data on population and educational level of neighborhoods and villages based on the Address Based Population Registration System (ADNKS), and the neighborhood and village results of the General Elections. First, the settlement units were grouped as rural/urban/metropolitan, then the sample was determined based on 12 regions.

The proportional distribution of the swing voters (14.2 percent) and non-voters (2.4 percent) reveals the following series. 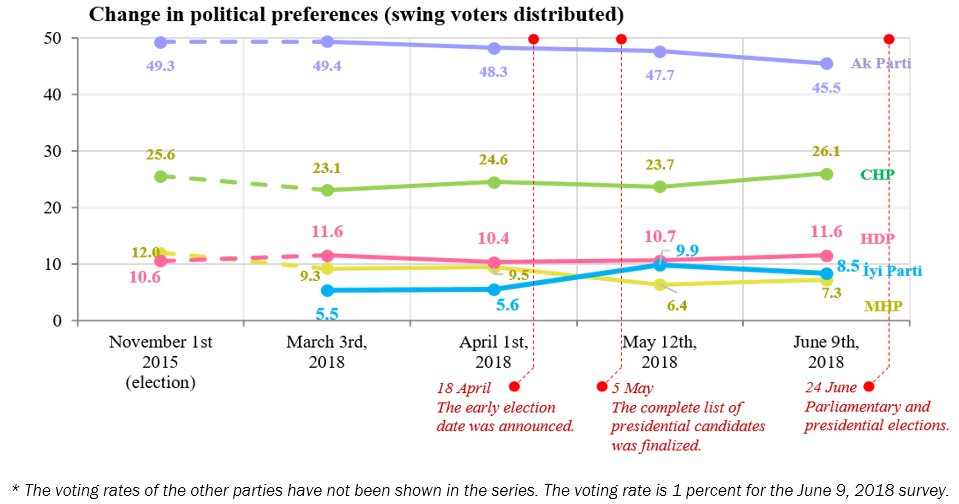 With regard to our findings about the presidential election, the situation that prevails after the distribution of the swing voters of 12.4 percent is as follows:

It is understood from the aforementioned tendencies and preferences prevailing on June 10 that the HDP will pass the electoral threshold, and thanks to the alliances, the Iyi Parti, MHP, SP and BBP will also gain seats in the parliament, thereby creating a parliament in which 7 political parties will be represented. According to these results, if a presidential election had been held on June 10, Erdoğan would have been elected in the first round.

We would also like to note three dynamics that bear the capacity to change our findings of June 10 and affect the outcome of June 24: The first factor is the mobility and the changes we have been observing in our graphs and tables for the last five weeks regarding which it has to be seen as to what rate the momentum will continue and which direction the changes will take during the period until the elections. The second factor is a voter turnout considerably below the rate of 85 percent. Finally, the third factor is the distribution of the overseas votes.

Respectfully submitted for your information.