Announcement to the Public Regarding the March 31st Local Elections

As is known, on the last Thursdays before elections our company shares with the public its most recent election poll results and predictions and as a principle does not share any election-related finding or publicly discuss poll results at other times.

We will witness a different practice and circumstance in the upcoming local elections—a first for our political history. Parties are entering local elections with formal and informal alliances. In some areas two parties have made “complete alliances,” with common candidates and lists both for the mayors and the local parliaments, whereas in other areas they have made “partial alliances,” with common mayoral candidates and separate local parliament lists. Yet in other areas, there no alliances. Furthermore, the alliances are not symmetrical, i.e. in some areas there is one alliance but no alliance in competition with it. In some areas HDP has not nominated any candidate, while in some areas, DSP, which seemed to have no significant electoral support in election polls, has nominated candidates who could influence the election outcome. Also, in some areas there are independent candidates, who were not taken into account in polls up until now. 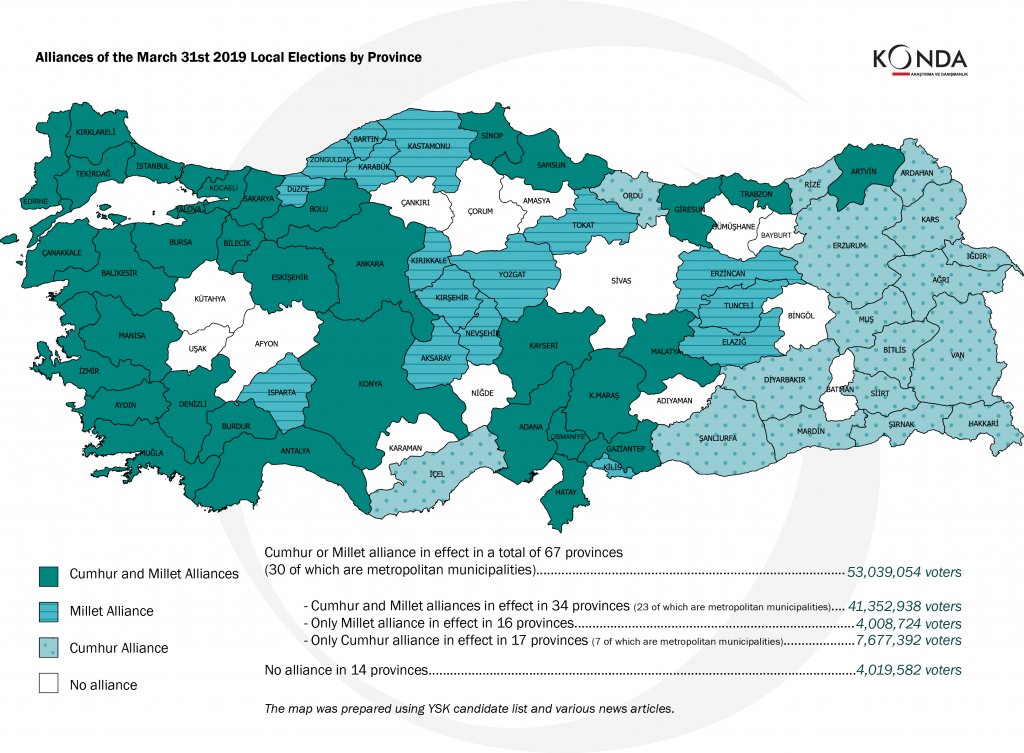 Due to these variations of competition, it will be impossible for KONDA to arithmetically calculate or speculate on the Turkey-wide vote percentage of any party for March 31st local election results.

While it is technically possible to conduct separate polls and come up with findings for the elections for each election area, the scale and extent of such polling is not part of our business model.

Of course given our business area, we have conducted polls for the local elections. However due to the confidentiality agreements with our clients for the 4 provinces, neither we nor they share data, findings or results with the public. Moreover, given the method, polls conducted in only these provinces are not representative of the whole of Turkey.

The issue at hand is a question of arithmetics, which independent of polling companies, their capabilities and polling techniques.

For the reasons outlined above, for the first time there will be no announcement regarding the upcoming local elections on the Thursday prior to elections.