Note on the Election on June 23

This note is being sent to subscribers of the KONDA Barometer Political and Social Surveys. In alignment with terms in agreements with our subscribers which authorize us to do so, it will also be published on the website www.konda.com.tr.

The survey this note is based on was conducted on June 15-16, 2019. Therefore our findings reflect the tendencies and preferences 7 days prior to the re-run of İstanbul Mayoral election.

For the survey, 3498 people in 157 neighborhoods within the borders of the İstanbul Municipality were interviewed face-to-face in their households. An age and gender quota was enforced for the 24 interviews conducted in each neighborhood. The sample was prepared by stratification of the data on population and educational level of neighborhoods and villages from the Address-Based Population Registration System, along with the neighborhood and village results of the general elections dated November 1, 2015.

The survey reflects the İstanbul Mayoral election preferences of the adult population above the age of 18 in Istanbul on the days of the fieldwork. The confidence interval is +/- 1.8 at 95%, +/- 2.4 at 99%.

The graph below shows findings of the surveys conducted since January 2019 when the candidates were announced, along with the result of the March 31st Mayoral election. 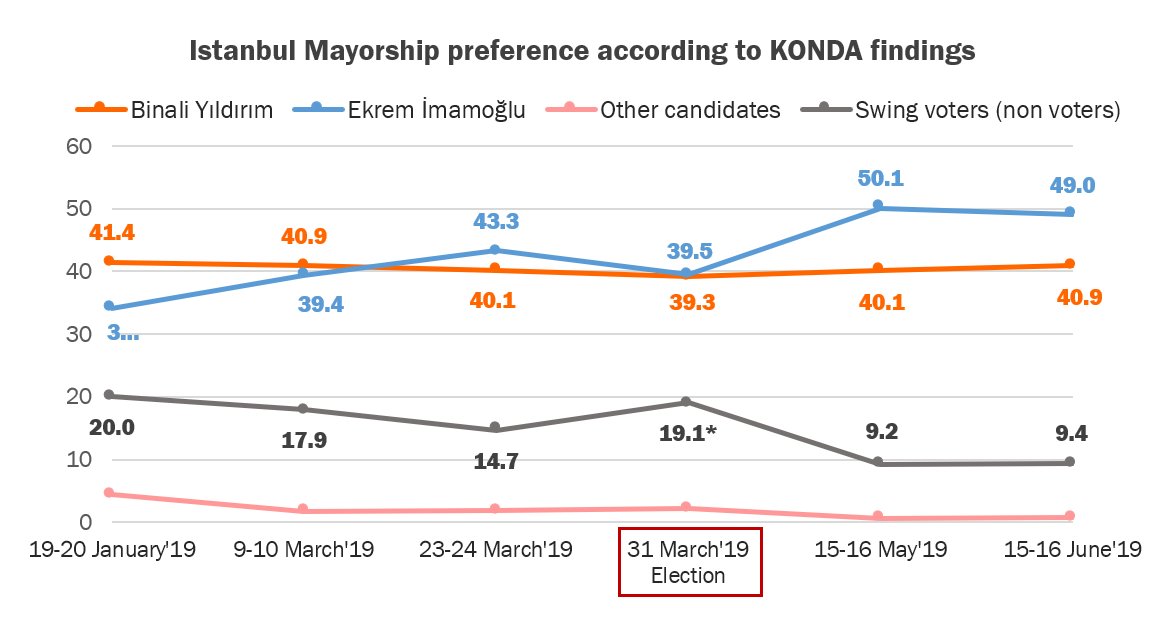 * Indicates the total of invalid votes and those who did not vole at the March 31st elections. The official results were recalculated by including with the non-votes so as to obtain the vole percentage of candidates.

When the 9.4 percent of undecided and non-voter electorate is distributed evenly, it is calculated that Ekrem İmamoğlu 54 percent and Binali Yıldırım will reach 45 percent of the total vote.